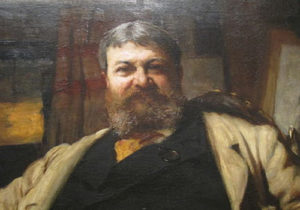 Henry Hobson Richardson was born at the St. Joseph Plantation and spent part of his childhood in New Orleans, where his family lived on Julia Row in a red brick house designed by the architect Alexander T. Wood.  He was the great-grandson of inventor and philosopher Joseph Priestley, who is usually credited with the discovery of oxygen.

Richardson went on to study at Harvard College and Tulane University. Initially, he was interested in civil engineering, but shifted to architecture, which led him to go to Paris in 1860 to attend the famed École des Beaux Arts in the atelier of Louis-Jules André. He was only the second U.S. citizen to attend the École’s architectural division—Richard Morris Hunt was the first – and the school was to play an increasingly important role in training Americans in the following decades.

He didn’t finish his training there, as family backing failed due to the U.S. Civil War.

Richardson returned to the U.S. in 1865. He settled in New York in October 1865. He found work with a builder, Charles, whom he had met in Paris. The two worked well together but Richardson was not being challenged. He had little to do and yearned for more. With no work Richardson fell into a state of poverty looking for more work Richardson developed his own style.The style that Richardson developed over time, however, was not the more classical style of the École, but a more medieval-inspired style, influenced by William Morris, John Ruskin and others. Richardson developed a unique and highly personal idiom, adapting in particular the Romanesque of southern France. His early works, however, were not very remarkable. “There are few hints in the mediocre work of Richardson’s early years of what was to come in his maturity, when, beginning with his competition-winning design … for the Brattle Square Church in Boston, he adopted the Romanesque.”[7]

In 1869, he designed the Buffalo State Asylum for the Insane (now known as the Richardson Olmsted Complex) in Buffalo, the largest commission of his career and the first appearance of his eponymous Richardsonian Romanesque style. A massive Medina sandstone complex, it is a National Historic Landmark and, as of 2009, was being restored.[8]

The 1872 Trinity Church in Boston solidified Richardson’s national reputation and led to major commissions for the rest of his life. Although incorporating historical elements from a variety of sources, including early Syrian Christian, Byzantine, and both French and Spanish Romanesque, it was more “Richardsonian” than Romanesque.[9][10] Trinity was also a collaboration with the construction and engineering firm of the Norcross Brothers, with whom the architect would work on some 30 projects.

He was well-recognized by his peers; of ten buildings named by American architects as the best in 1885, fully half were his: besides Trinity Church, there were Albany City Hall, Sever Hall at Harvard University, the New York State Capitol in Albany (as a collaboration), and Town Hall in North Easton, Massachusetts.

Despite the success of Trinity, Richardson built only two more churches, focusing instead on the monumental buildings he preferred, plus libraries, railroad stations, commercial buildings, and houses.[11] Of his buildings, the two he liked best, the Allegheny County Courthouse (Pittsburgh, 1884–1888) and the Marshall Field Wholesale Store (Chicago, 1885–1887, demolished 1930), were completed posthumously by his assistants.[12]

Richardson died in 1886 at age 47 of Bright’s disease, a historical term for the kidney disorder chronic nephritis.  On his last day, he signed an informal will directing the three assistants still remaining to carry on the business, which was soon formalized as Shepley, Rutan and Coolidge. One example includes Richardson’s design for the Greater Cincinnati Chamber of Commerce Building. Richardson had won the selection process in 1885 and nearly finalized the work, but after his death, his aforementioned successors completed the project.[15]

He was buried in Walnut Hills Cemetery, Brookline, Massachusetts. Despite an enormous income for an architect of his day, his “reckless disregard for financial order” meant that he died deeply in debt, leaving little to his widow and six children.[16]